African elephant numbers have dropped from about 26 million in the 1800s to 415,000 today. While this is largely due to European colonisation, poaching and habitat loss, these majestic animals now face another grave challenge.

Climate change is causing droughts in much of Africa to become longer and more severe. This damages elephant habitats and denies them the water they need. Due to their unique physiology, African elephants need hundreds of litres of water each day to survive.

The African savanna elephant is listed as endangered. If the situation doesn’t change, Africa – indeed, the world – may lose one of its most iconic animal species. 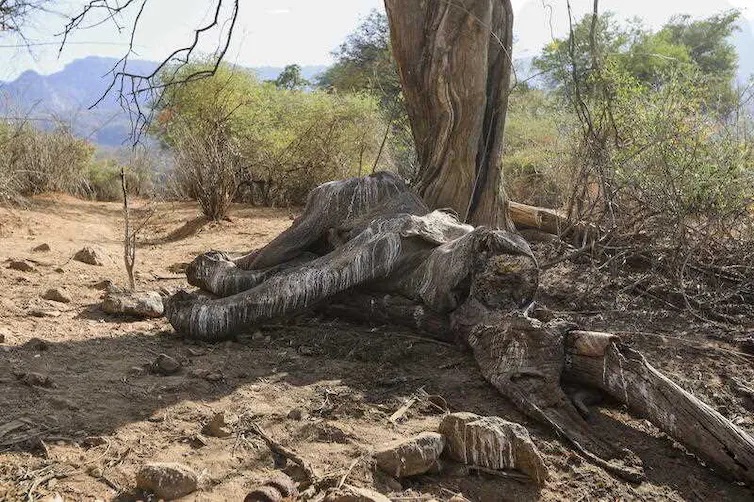 The carcass of an elephant discovered this year. It is suspected to have died due to the ongoing drought in Kenya. DANIEL IRUNGU/EPA

Elephants are not just important for their ecological, cultural and economic value. They are also a keystone species – that is, they help hold ecosystems together. This means their decline has far-reaching consequences.

Many African ecosystems pivot around the lives of elephants. Elephant feeding habits, such as pushing over trees and peeling off bark, can turn woody vegetation into grasslands. This makes room for smaller species to move in. Their digging for water in dry riverbeds creates water holes other animals can use. And as they migrate, elephants help spread seeds in their dung.

Under climate change, long, intense droughts across southern and eastern Africa are escalating. Some have lasted more than 20 years.

The conditions have left many elephants desperate for water. Research as far back as 2003 shows elephants in Zimbabwe were dying during drought. And in 2016, when a drying El Nino weather pattern hit southern Africa, there were reports of more elephant deaths, prompting a local conservation group to drill bore holes to provide relief.

Drought can also reduce the availability of food, causing elephants to starve. It can also mean young elephants die or don’t develop properly, because their parched mothers produce less milk.

So, why do elephants struggle in drought and heat?

When elephants experience high internal temperatures, it can disrupt the function of cells, tissues and organs such as the liver and cause them to become sick and die.

Humans and other animals also suffer heat stress. But elephants are particularly vulnerable because they can’t sweat it off.

The graphic below shows how heat accumulates and dissipates in elephants.

Heat accumulates through an elephants’ natural metabolism and physical activity, as well as being absorbed from the environment.

But it does not always effectively dissipate. Elephants’ thick skin slows heat loss – and their lack of sweat glands exacerbates this. 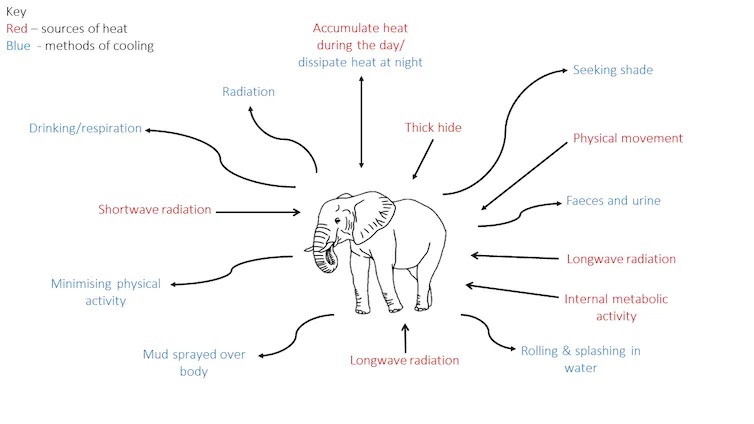 Figure 1: the sources of heat gain in elephants, how heat is retained, and how they dissipate heat.

What’s more, elephants are the largest of all land mammals, weighing up to eight tonnes. They also have a large body volume – which generates heat – but a relatively small surface area (their skin) from which to lose this heat.

Water is essential for elephants to cope with heat. They swim and spray their skin with mud and water; the subsequent evaporation mimicks sweating and cools them down.

And elephants cool themselves internally by drinking several hundred litres of water a day.

Creating artificial water sources is a common management intervention when elephants need water. This includes the use of pipes, bores and pumps.

But this measure can be problematic. Sometimes, the water is sourced from supplies needed by local people. And large numbers of elephants congregating around water can permanently damage the local environment and reduce food availability for other animals.

Historically, elephants migrated to water during drought. But the introduction of fenced areas in the landscape has disrupted this movement.

But as climate change worsens in Africa, elephants and other wildlife must be able to move freely between connected habitats.

Wildlife corridors may provide an answer. These are protected channels of vegetation that enable animals to move between fragmented patches of habitat. Wildlife corridors work well for megafauna in India and the United States and would likely increase mobility for much of Africa’s wildlife.

Introducing more wildlife corridors, especially in southern and eastern Africa, would require removing fences. This change would have repercussions.

Nearby communities – which have not coexisted with elephants since colonisation – would have to adjust to the change. The removal of fences may also lead to an increase in poaching. And letting elephants roam the landscape may make them less accessible to tourists, which could reduce tourism revenue.

But communities have coexisted with elephants in the past. And community-based projects have been shown to reduce conflict between humans and wildlife. In some cases, they’ve also led to lower poaching rates and increased quality of life for communities.

Community management projects, such as in Northern Kgalagadi in Botswana, show how local expertise – drawn from millennia of experience and knowledge – can guide wildlife management. Research has shown successful outcomes – both socially and ecologically – in places where elephants share landscapes with people.

This would be bad news for the health and stability of natural ecosystems in Africa – and a blow to Africa’s people.

This article is republished from The Conversation under a Creative Commons license. Read the original article.