Fenner in the news - Goats: Pest or produce?

The value of the hardy goat was acknowledged back in 1788 when they were brought to Australia on the first fleet for their meat, milk and fur.

Over the years goats have escaped from farms to establish a new breed of goat that now numbers an estimated 6 million across the continent.

They hold an uncomfortable place in the Australian landscape shifting between pest and produce.

But now there are attempts to manage the rangeland goat to become a major commodity, but can these wily creatures be managed and harvested? 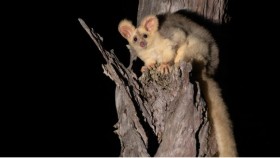