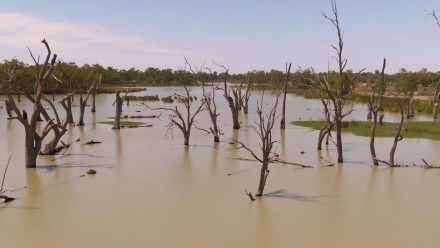 PhD projects in anticipatory governance at the Institute for Water Futures, Fenner School of Environment and Society, ANU »

The original thin plate (formerly Laplacian) smoothing spline surface fitting technique was described by Wahba (1979), with modifications for larger data sets due to Bates and Wahba (1982), Elden (1984), Hutchinson (1984) and Hutchinson and de Hoog (1985). The extension to partial splines is based on Bateset al. (1987). This allows for the incorporation of parametric linear sub-models (or covariates), in addition to the independent spline variables. This is a robust way of allowing for additional dependencies, provided a parametric form for these dependencies can be determined. In the limiting case of no independent spline variables (not currently permitted), the procedure would become simple multi-variate linear regression.

Thin plate smoothing splines can in fact be viewed as a generalisation of standard multi-variate linear regression, in which the parametric model is replaced by a suitably smooth non-parametric function. The degree of smoothness, or inversely the degree of complexity, of the fitted function is usually determined automatically from the data by minimising a measure of predictive error of the fitted surface given by the generalised cross validation (GCV). Theoretical justification of the GCV and demonstration of its performance on simulated data have been given by Craven and Wahba (1979).

The ANUSPLIN package is made up by six programs:

The flow chart below shows the main data flows through the programs described in the program summary. The overall analysis proceeds from point data to output point and grid files suitable for storage and plotting by a geographic information system (GIS) and other plotting packages. The analyses by SPLINA and SPLINB provide up to six output files which provide statistical analyses, support detection of data errors, an important phase of the analysis, and facilitate determination of additional knots by ADDNOT for the SPLINB program. The output surface coefficients and error covariance matrices enable systematic interrogation of the fitted surfaces by LAPPNT and LAPGRD. The GCV files output by AVGCVA and AVGCVB can also assist detection of data errors and revision of the specifications of the spline model.

The surface fitting procedure was primarily developed for this task so that there are normally at least two independent spline variables, longitude and latitude, in this order and in units of decimal degrees. A third independent variable, elevation above sea-level, is often appropriate when fitting surfaces to temperature or precipitation. This is normally included as a third independent spline variable, in which case it should be scaled to be in units of kilometres. Minor improvements can sometimes be had by slightly altering this scaling of elevation. This scaling was originally determined by Hutchinson and Bischof (1983) and has been verified by Hutchinson (1995, 1998b).

Over restricted areas, superior performance can sometimes be achieved by including elevation not as an independent spline variable but as an independent covariate. Thus, in the case of fitting a temperature surface, the coefficient of an elevation covariate would be an empirically determined temperature lapse rate (Hutchinson, 1991a). Other factors which influence the climate variable may be included as additional covariates if appropriate parameterizations can be determined and the relevant data are available. These might include, for example, topographic effects other than elevation above sea-level. Other applications to climate interpolation have been described by Hutchinson et al. (1984ab, 1996a) and Hutchinson (1989a, 1991ab). Applications of fitted spline climate surfaces to global agroclimatic classifications and to the assessment of biodiversity are described by Hutchinson et al. (1992, 1996b).

To fit multi-variate climate surfaces, the values of the independent variables need only be known at the data points. Thus meteorological stations should be accurately located in position and elevation. Errors in these locations are often indicated by large values in the output ranked residual list. Recent applications have examined the utility of using elevation and slope and aspect obtained from digital elevation models of various horizontal resolutions (Hutchinson 1995, 1998b).

The LAPGRD program can be used to calculate a regular grids of fitted climate values and their standard errors, for mapping and other purposes, provided a regular grid of values of each independent variable, additional to longitude and latitude, is supplied. This usually means that a regular grid digital elevation model (DEM) is required. A technique for calculating such DEMs from elevation and stream line data has been described by Hutchinson (1988, 1989b, 1996).